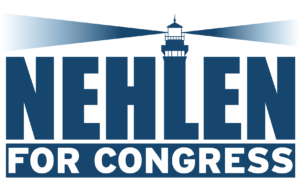 Delavan, WI — Republican U.S. House candidate Paul Nehlen is the first candidate or elected official willing to stand up and propose a legislative solution to the problem of censorship of Americans’ lawful speech on social media.

“We need a federal law prohibiting censorship of lawful speech on major social media platforms,” Nehlen asserts. “It is well-known that Twitter, Facebook, and YouTube discriminate against the right-wing, as evidenced by FCC Chairman Ajit Pai’s recent comments. While widely heralded for those comments, they rang hollow with no suggested solution. This law is that solution. It will extend Americans’ First Amendment free speech protections onto major social media platforms.”

“We are not extensively regulating or ‘trust-busting,'” Nehlen explains, “because people generally like how the platforms perform in terms of functionality. This law will not interfere with features or functionality, so market forces will remain in play. The problem is their censorship of lawful speech. Hypocritically, the same companies that support net neutrality also want to censor your speech. We say no.”

For purposes of this legislation, “censorship” includes:

“Lawful speech” is based upon the standards enshrined in the U.S. Constitution, with the following limitations:

The legislation would impose company fines of $500,000 per instance of wrongful censorship, and would be enforced by the FCC. Judicial remedies (both monetary and non-monetary) may also be available to aggrieved parties.

“The bedrock of American society is freedom of speech. Social media companies have usurped this freedom, and we intend to give it back to the American people,” says Nehlen.

“This is just one more instance where Paul Ryan has shown he isn’t getting the job done in Washington. The GOP’s voters are being systematically censored off of the primary channels of public communication by left-wing tech giants, and Ryan — indeed, the entire GOP Congress — has sat utterly mute for years and allowed it to happen. In the absence of leadership, I willingly step into the breach.”

And now for the Q&A on the proposal that VICE could have published, but didn’t, so we went to VDARE.com and they published the Q&A:

VICE:  Can you define lawful speech?

VICE: Do you see your proposed legislation as a federal law or an amendment to the US Constitution?

A federal law. We already have the First Amendment, though private companies are not required to follow it. They are, however, bound by federal statutes. This legislation will require major social media platforms to respect Americans’ First Amendment protections.

This is a bizarre question, in that government already regulates how private organizations function all the time, in myriad ways. For example, when OSHA says to private construction companies “all construction workersmust wear a hardhat on site,” is that not government regulating how private organizations function? Of course it is. Entire industries have copious laws and regulations detailing what all private businesses within that industry must (and must not) do. Publicly-traded corporations must comply with mind-boggling numbers of laws and regulations relating to virtually every aspect of their internal and external operations. So government regulation of private entities is hardly some kind of newfangled concept.

VICE: Isn’t censorship, by its very definition, something the government does?

VICE: Why do you believe that a private organization choosing what content it wants to publish on its platform is censorship?

Because, as I mentioned, private organizations can engage in censorship in the same way the government can, a company selecting what content it wants to publish is, technically, suppressing the content it does not want to publish. But we don’t generally have a problem with that, because people understand that such curations are made in order to present the most impressive of the lot, or the most topical, the funniest, the very worst, or whatever the criteria for selection happen to be. There may also be physical restrictions that necessitate such curation (e.g., limited space).

But that process (curation by the company) is not actually what is occurring on social media platforms at all. The companies are not choosing what content to publish. I’ll explain:

Unlike, say, the op-ed section of a newspaper — in which people send in letters and the newspaper reads them and then decides what to publish — on social media platforms the content is not pre-screened, so the company exercises no editorial control. Rather, anyone can post (i.e., self-publish) their speech simply by clicking the “Post” button, at which point the speech has been uttered, without any pre-screening by the company.

Nobody reasonably believes, for example, that a user’s post on Twitter is Twitter’s own speech. If a user, Fred Jones, tweets “I want to assassinate Trump,” nobody goes around pointing to it and saying, “Oh my God, Twitter wants to assassinate Trump!” The speech is quite obviously Fred Jones’ speech, not Twitter’s. It does not, by virtue of being posted by Fred Jones, magically become Twitter’s speech in addition to Fred Jones’ speech.

So, to return to your question, but with the proper framing for the social media platform context, you are asking whether, for instance, a company’s deletion of already-posted user content would be considered censorship. The answer is, once again, yes. But because the user content is not the company’s own speech, there is no compelled speech issue, and Congress is free to pass legislation placing limitations on a company’s ability to censor user content on its platform.

Note that nothing about this legislation imposes any new limitation on any of these companies from speaking, as a company, about anything they wish, or through any medium they wish; thus, the company’s own freedom of speech remains fully protected.

VICE: Do you believe your proposed legislation limits the ability of private organizations to operate independently of government control and regulation?

Again, this is a rather bizarre question, in that every law and every regulation that applies to a private organization “limits [their] ability…to operate independently of government control and regulation” to some degree. In some cases, that limitation is very minimal. In other cases, it is much more substantial. Different industries have varying amounts of laws and regulations they must follow. The social media industry, perhaps surprisingly (because of its importance in the day-to-day lives of so many Americans), has very few industry-specific laws or regulations. This has allowed a great deal of innovation, but it has also allowed these companies to treat their users quite poorly, arbitrarily, and capriciously, disrupting their access to the platforms with no explanation and no meaningful recourse.

So, to answer your question as to whether this legislation limits the ability of major social media platforms to operate independently of government control and regulation, I think the answer has to be no — unless you believe that functional monopolies that control the primary channels of public communication ought to be in the censorship business.

VICE: Can you define “explicit, credible threat of physical violence” and how it might differ from other violent threats?

“Explicit”: The threat must be clear and unambiguous on the face of the content itself. If a stranger were to look at the post out of context, would he/she conclude its text includes a threat to commit physical violence against another person(s)? (As a rule of thumb, if you have to ask “is that a threat?” then no, it is not an explicit threat.)

“Credible”: Whether a reasonable person would believe the threat to be genuine. If you’re not thinking you need to call the police over it, it’s not credible. If it’s just some anonymous account saying “I’m going to rape you,” or “die f—-r” with nothing more, use block or mute and learn to ignore it; it obviously isn’t credible. Generally, whether a threat is credible can be determined from the face of the post and any preceding posts in the interaction.

If it is explicit and credible, then it’s also illegal, so report it to the platform and they can look into it, and contact law enforcement if needed. (Since the social media companies won’t have nearly as many frivolous reports to sift through thanks to the legislation, they’ll have ample human resources to review these more occasional credible threats and give them close attention.)

VICE: Does telling someone to “eat a bullet” rise to the level of a credible physical threat?

Obviously not (if only because that phrase means they ought to commit suicide).

One of the many reasons that censorship has gotten out of control is that people have developed a tendency to intentionally engage in bad-faith “interpretations” of what is said—often in contravention of all logic and common sense—in order to pretend that they’ve just been the victim of an explicit threat.

Again, as a rule of thumb: If you find yourself replying to someone, “Is that a threat?” then it wasn’t actually a threat. If you’re on the receiving end of an explicit, credible threat of physical violence, it would be obvious to anyone, not just you and/or your friends and followers, and you might even want to call the police about it before you report it to the platform. Short of that, handle your interpersonal conflicts on social media by controlling your own experience with the block and mute features available, instead of seeking to control someone else’s experience on the platform by attempting to get them censored.

VICE:  What’s the market cap at which point you see a private industry becoming a public one, subject to these regulations?

Most likely, slightly under where Twitter currently is. Other than the “big three” (Facebook, YouTube, and Twitter), the others aren’t even close to rivaling Twitter’s share. There appears to be very little chance of any companies currently below the threshold growing big enough to trigger it for the foreseeable future.

There are so many examples, I’d probably have to express the number in scientific notation.

It is widely known that censorship on major social media platforms disproportionately affects the right-wing, and it would take real cheek for anyone who has been around these platforms for a while not to stipulate to such an obvious fact. But regardless, I think that misses the more important point, which is that censorship of lawful speech should not be occurring at all, to any side, in the new de facto public square. It is just as disruptive, just as upsetting, and just as abusive when it happens to someone on the left-wing — and make no mistake, it happens plenty. These are megacorporate monopolies that benefit from anticompetitive forces such as “network effects” (which are at their apex in the social media context) to give them an absolute lock over the primary channels of public communication. This has led to widespread abuses of power, the arbitrary and capricious silencing of millions of Americans, and an unprecedented chilling of expression and infantilization of the public that is dangerously incompatible with American free speech values.

Paul Nehlen is a turnaround specialist, business executive, and inventor who started on the factory floor, who, with God’s grace and some determination, rose to lead Fortune 500 manufacturing businesses around the world. Nehlen challenged Speaker Paul Ryan in Wisconsin’s 2016 First Congressional District to stop Trans-Pacific Partnership and secure America’s border. He is waging the battle for Wisconsin’s workers, against the refugee resettlement racket, and lends his voice to the battle for America’s values. He lives in Delavan, Wisconsin.