This campaign is powered by you, not the DC crowd. Can we count on you?

DAILY CALLER: Paul Nehlen Is Back Running Against Paul Ryan

Paul Nehlen — a businessman, congressional candidate, and Paul Ryan foe — says he is coming for the establishment. Nehlen ran an unsuccessful campaign against House Speaker Ryan in his home district in 2016. Now,

Hillary Was Elected President Of California

This was sent to me this morning and I thought it was worth sharing...let's hear it for the Electoral College! We hear a cacophony of blaring and bleating from the media and the Hillary gaggle that

In reply to
22 hours ago
6/ You want your voice added to the millions of other Americans demanding protection from transnational criminals?
#ShallNotCensor = #BTW
View on Twitter
4
36

In reply to
22 hours ago
5/ #ShallNotCensor ensures YOUR voice is heard. Not just theirs, not just mine, YOUR VOICE https://t.co/Ayw6rCwYiZ
View on Twitter 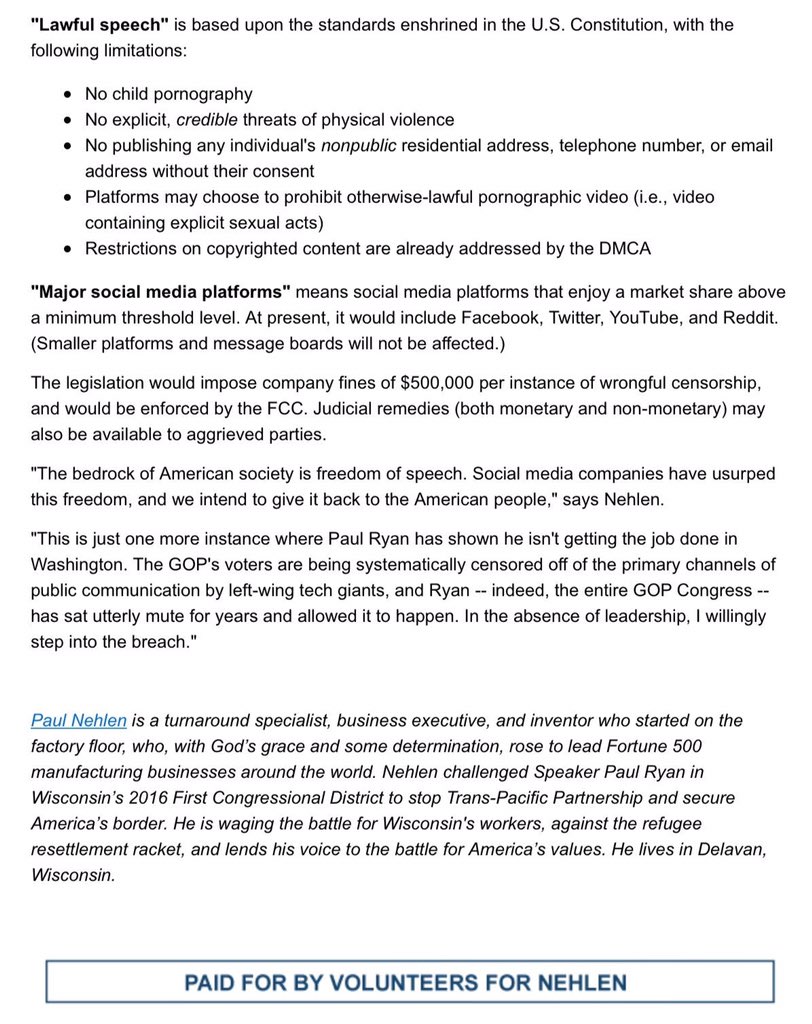 In reply to
22 hours ago
4/ #ShallNotCensor is a new dimension in the spiritual battle, and they know it. https://t.co/bYImorWDaL
View on Twitter 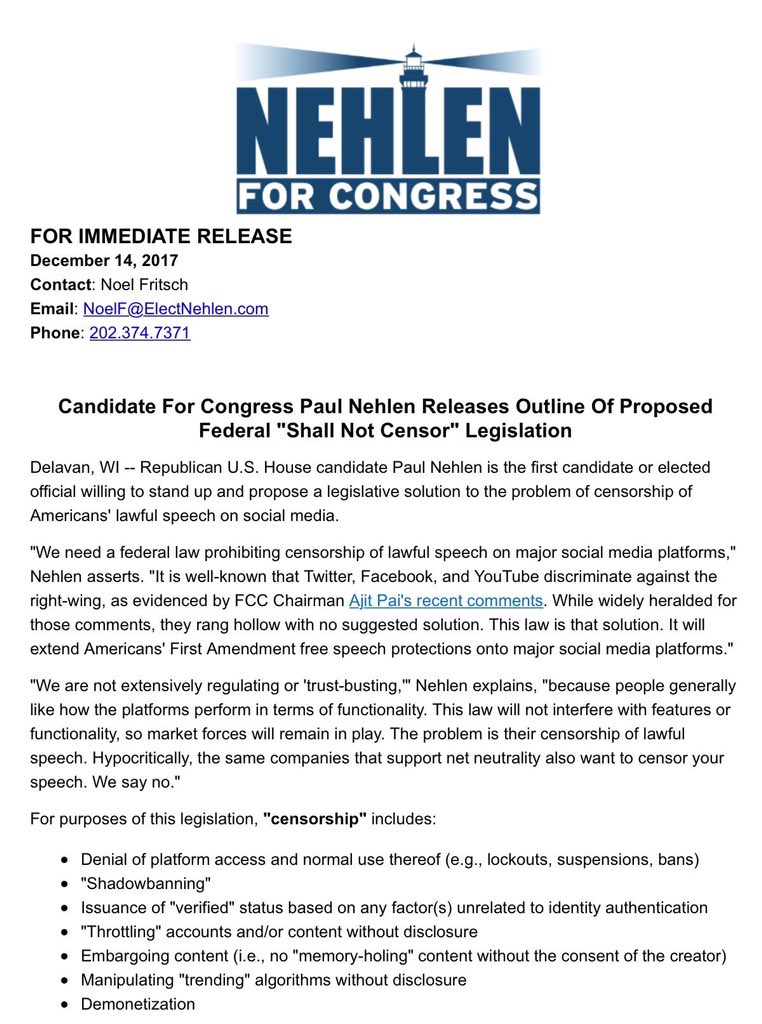 In reply to
22 hours ago
3/ See how the game is played, bigots? https://t.co/QmRTXHzBDX
View on Twitter 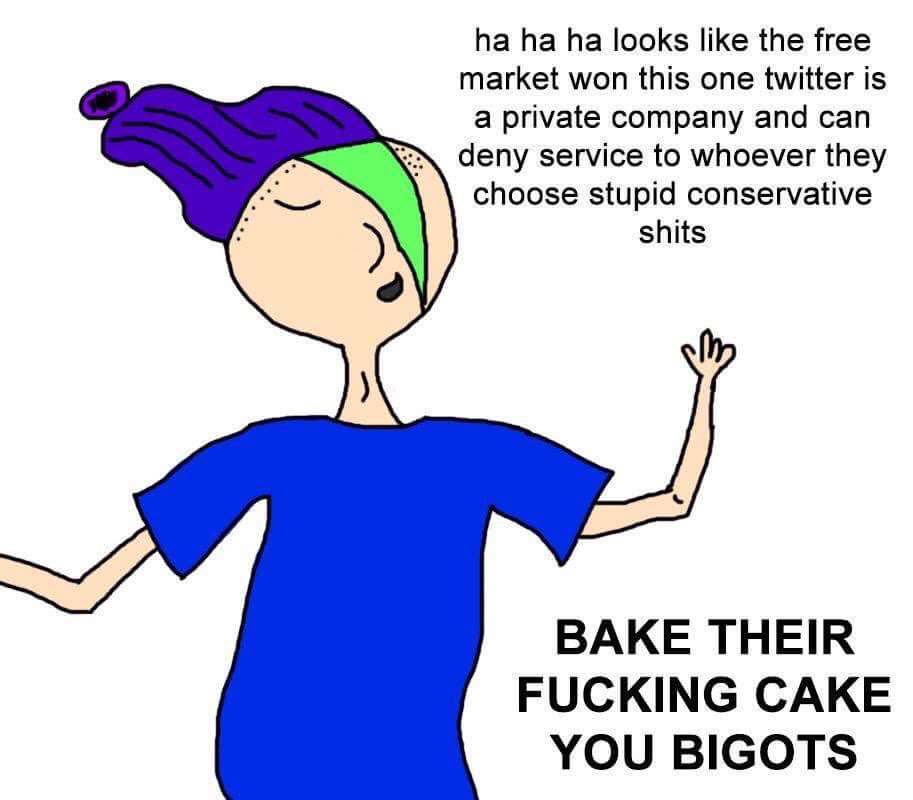 In reply to
22 hours ago
2/ #ShallNotCensor ensures the red pills will never stop, that media will never control your access to information. The gatekeepers tremble.
View on Twitter
16
65

Nehlen Unleashed
If you haven’t read the Twitter feed of Paul Nehlen, get over there now while you still can. Unless he has some grade-A dirt on Jack Dorsey that we don’t know about, his account will pr…
occidentaldissent.com
195 27    View on Facebook
Paul Nehlen3 days ago
Are you surprised?

Ryan Delivers For Hedge Fund Donors, Thwarts Trump's Attempts to Put Middle-Class First
Paul Ryan, acting on behalf of his big Wall Street donors, repeatedly frustrated the president's attempts to end a tax loophole opposed by the vast majority of the American people.1 On the campaign trail and in the White House, President Trump and conservative middle-class American voters called tim...
electnehlen.com
96 16    View on Facebook
Paul Nehlen3 days ago
I'd like you to think about this: If pro-White is White supremacy, what is pro-Jewish?
379 108    View on Facebook
Paul Nehlen3 days ago
I'd love to meet with your friends, family, and neighbors. Sign up today!
Host a Coffee for Paul Nehlen for Congress
Invite your friends, family and neighbors to meet Paul, ask questions and join the fight to Make America Great Again!
secure.electnehlen.com
29 11    View on Facebook
Paul Nehlen4 days ago
Our President is doing a great job. Sign here if you agree! >>>https://secure.electnehlen.com/stand-with-donald-trump/
Trump's excellent leadership unites Americans
226 23    View on Facebook
Paul Nehlen5 days ago
Beautiful candlelight service last night at Calvary Community Church. Hearts full of Jesus love, hope, peace, joy...and then we lit the Messiah candle.